John Maragozidis is an exceptional man with a passion for endurance racing on his quad bike ‘Wendy’, a Yamaha Raptor 700 that he’s modified for the most extreme desert racing. With experience that includes 13 desert races, the 3-time Australasian Safari winner says that nothing prepared him for the 2019 Dakar Rally.

John “wouldn’t dream of running a standard radiator in an event like Dakar” and he chose an Adrad Performance radiator with specifications designed to withstand the challenges of racing in the desert, paired with a Setrab oil cooler from Adrad.

We caught up with John to see how his Dakar race played out, and to congratulate him on finishing this phenomenal test of endurance.

The terrain and the course were a lot more technical than expected. You had to be an A-grade rider with a lot of experience to survive. It was essential to manage your time meticulously. The race required a combination of road-book and way-point navigation, very different from the Australian desert races.

Way-point navigation in the undulating dunes of Peru was incredibly challenging. You aim the machine to the next location using a compass setting. With walls of sand blocking vision beyond 20m, it’s easy to get lost, especially when it’s overcast and you can’t rely on the sun for a bearing. When you reach the waypoint, the GPS validates your location and you aim for the next one.

Many riders and teams were air-lifted out of the desert. To survive the attrition, you needed to be physically well-prepared for the race and mentally strong enough to make logical rather than emotional decisions. 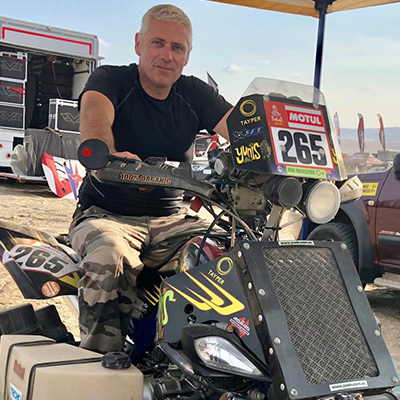 What were the main challenges that the bike faced during the event?

The dust throughout the rally was really fine, even finer than the Australian bull-dust. If you imagine talcum powder that’s ankle to knee deep, covered by a thin crust, that’s what the drivers had to traverse. If you stop, you’ll sink, and if you’ve got lost, there’ll be no one around to help. On the marathon day, one of the guys shook 2 full cups of dirt out from his air filters.

This meant that good air filtration was absolutely crucial to successful completion of the event. I carried pre-filters and air filters on board to protect the engine, and took a very conservative approach, swapping the filters regularly. It did the trick, as each night when the oil samples were tested, I had one of the cleanest oils in the field. I knew then that I was running a good package.

Temperatures during the race varied with the altitude and distance from the coast. It was well above 40⁰C in the dunes for a few hours, but mostly the temperature sat in the mid to high 30’s.

I had the overflow set up to run over my hands so I’d know instantly if there was an issue, but the bike ran perfectly. The Setrab oil cooler had a fan and a thermo switch that coincided with the coolant temperature, ensuring that all the fluids were kept at the same temperature.

Would you go back to race Dakar again?

Yes, if time and finances allow it. I’d make some subtle changes to the quad bike, like adjusting the suspension which was too rigid for Dakar. Otherwise the bike set up was 95% spot on for the race.

Stepping Up Your Cooling Performance

Built Tough for Built Not Bought

SIGN UP NOW FOR THE LATEST NEWS AND GREAT DEALS

THINGS YOU NEED TO KNOW

Having Trouble Fitting your radiator read the ADRAD Radiator Warranty and Installation Guide. 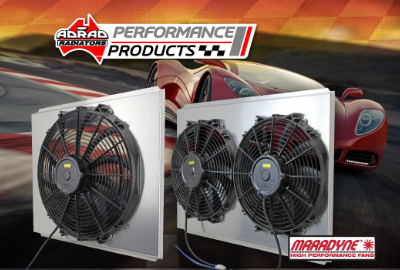 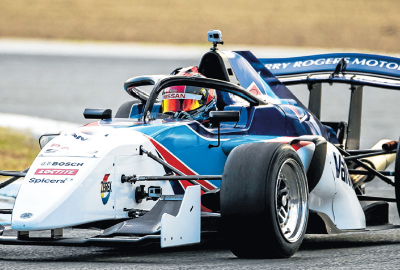